Connecting the Ballot Box to Thanksgiving 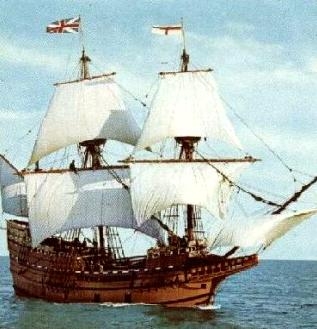 “Do not be deceived: God is not mocked, for whatever one sows, that will he also reap. For the one who sows to his own flesh will from the flesh reap corruption, but the one who sows to the Spirit will from the Spirit reap eternal life. And let us not grow weary of doing good, for in due season we will reap, if we do not give up.  So then, as we have opportunity, let us do good to everyone, and especially to those who are of the household of faith.”  (Galatians 6:7-10)

Our Separatist (Congregational) forefathers came to America from England on the Mayflower to practice the Christian faith freely and separate from the English government and King James.   In the words of William Bradford, written from his firsthand account On Plymouth Plantation, they came here to establish a church where they could worship God “according to the simplicity of the Gospel, without the mixture of men’s inventions, and to have and to be ruled by the laws of God’s word, dispensed in those offices and by those officers of pastors, teachers, and elders, according to the Scriptures.”  The authority of the state run church in England was at odds with the authority of God revealed in Scripture.  Christians found themselves asking, “Do we violate our consciences and God’s Word to obey the political authorities or do we disobey those God has put over us because they cause us to violate our religious conscience?”  By separating themselves geographically from the reaches of the state run church, they would be able to worship God and practice the Christian religion without inappropriate governmental interference and corruption.  They sought to escape religious prosecution in England where they, according to Bradford, “lived among the enemies of religion.”   The Pilgrims embarked on the costly journey across the Atlantic arriving in poor health and with very little in the way of earthly provisions.  Even so, they persevered in the faith and in their devotion to God, finding many blessings in the midst of their trials.

Some non-Christians arrived with the original Separatists and others soon followed them seeking financial opportunity, often at the expense of others in the new land.  Chaos, crime and dissension quickly crept into local communities and even the church, causing Bradford to remark, “Where the Lord begins to sow good seed, there the envious man will endeavor to sow tears.”  Contrary to popular belief, the Separatists, and later the Puritans, were not self-righteous or self-reliant.  Their establishment of Congregational churches and local governments (beyond the original Mayflower Compact) recognized the importance placed on the local community and on its need to care for one another.  Harvard professor David Hall writes, “they published a code of laws and made them accessible to everyone, believing the rule of law protected against unjust and arbitrary authorities.  Civil courts practiced speedy justice and local juries of one’s peers encouraged reconciliation and restitution.”  Their churches remained rightfully separate from the government’s control and the civil society linked political power with the ethic of the common good found in the Bible.

Because of the early influence of our Congregational forefathers, we can be thankful that our federal, state and local governments were established with the purpose of seeking the common good and that we now have an opportunity to elect candidates and vote on legislation that will continue to seek that founding Biblical purpose.  If we are Christ’s disciples, we are responsible to further that purpose, as we approach the ballot box on November 6th, as witnesses to Christ in a culture that too often redefines liberty as a matter of personal entitlement rather than an obligation to the common good.

We can also be thankful that the separation of church and state endures, despite numerous recent attempts to define and amend it for political and ideological gain.  We must advocate for continuing the religious freedom in which this country was founded, lest we find ourselves one day facing the same dilemma which caused the Pilgrims to set sail on the Mayflower.  Finally, we can thank God that we now live in a republic and not a monarchy.   It is a republic where the voices of its citizens and those of the nation’s founding fathers are often heard and heeded.  As Christians we have an even greater reason for thanksgiving this time of year, as ours is a hope far greater than any government or political candidate, for we know the One whose voice is always heard and is sovereign over all.